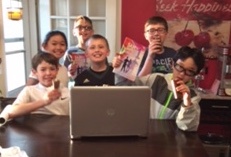 I was recently asked to join a book club discussion for one of my novels, Sam & The Secrets of the Universe. The book is geared toward young readers so I was delighted to find a group of eleven-year-olds had read my book and had questions for me. Their book club meets once per month, and they take turns picking what to read next. They throw a themed gathering, and this time the theme was baseball since the main character, Sam, is a star player. Since they’re based in Wisconsin and I’m in Los Angeles, I joined them via Skype for the last part of the evening. They asked me a series of questions and an interesting conversation ensued. Here’s an abridged version of the Q&A:

There’s a number one on the cover of the book so we assume there are more books coming in this Universe. Did you know when you started writing that it would be more than one book? Yes. I originally planned for 7 books to be in the series because there are seven circuit planets in Havona. I’ve started outlining the second and third book, and I now wonder if the series will only be 3 books because I stumbled on an interesting twist to wrap it all up quicker. It’s still to be determined!

We think Ananda and Sam have a secret connection, perhaps through a past life. Is that true? SPOILER ALERT: Yes, my plan was to plant the seeds about a past connection, which will be further explored in the next book.

What was your inspiration for Bob? (This was their favorite character) I find the human brain so interesting, and I thought it’d be cool to have a smart character who was just one big brain. But then I thought it’d be fun to give him some sort of body so he could move around, and I just thought a jellyfish body would be cool. A beta reader pointed out in an earlier draft that Anti-Bob needed to be different than Bob, and that’s why Anti-Bob talks so much.

What was your inspiration for Ananda? Ananda was inspired by my cat. Her name is Ananda and she has a split face — one side black and one side orange. In the first draft Ananda was a cat, but the second draft I made her more human with cat-like behaviors.

Why does Quark stink? I had fun creating new alien species and worlds, and in doing so I tried to excite all 5 senses, including smell. I wanted Quark to be so different from Sam which makes them hate each other at first. Once they get to know each other, they are best friends. This is a good life lesson to get to know someone before judging them, especially if they look (or smell) different than you! They might turn out to be your best friend despite your differences.

Why were the Anti-Selves different, but not necessarily complete opposites of the main characters? The Anti-Selves in the book represent “shadow” traits in each character; personality flaws that they try to ignore in themselves. We all have these shadow traits, and our lives are easier if we notice and accept these traits. That’s one of the lessons Sam must learn.

***I also asked them some questions which could be used to spark conversation for other book clubs out there interested in exploring the secrets of the universe!

Who was your favorite character and why?

Who do you think is the Mystery Man following Sam?

What was your favorite ‘secret of the Universe’ that Sam learned?

Why was it so important for Sam to go through the Black Hole? Would you have done the same thing?

Do you think Sam belongs on Havona or on Earth?

What new alien species and lands do you envision? Be creative!

I had so much fun discussing the book, and I’d be happy to join other clubs around the world. If you’d like me to Skype with your Book Club regarding either Love from Mars or Sam & The Secrets of the Universe, please email me via the Contact page.